I’m grateful that Caleb is striving to push himself.  (Most of the time.)  He wanted to find a hike that would really challenge him.  When he mentioned this to Bro. Jarvis, our neighbor and church friend, Bro. Jarvis told him that Lake Constance is the hike he is looking for.  Caleb got home and looked it up.   This is what it says on wta.org:

The Lake Constance route is not a casual hike to a lake. It’s a Class 2 and sometimes Class 3 scramble that requires continuous attention and careful hand work in areas where a mistake could prove fatal. People who have a fear of heights or are less than 100% confident in their climbing skills should avoid this route

Considered the hardest hike in Olympic National Park, the Lake Constance route was made worse in 2009 when a fire burned the lower section. The upper reaches test the human body and are a right of passage among Olympiphiles. Risks are weighed against the reward of beholding a deep blue tarn that fills a cavity below some of Olympic’s tallest peaks.

Caleb was in.  He called up a few friends and invited them to join him.  I’m not sure what was involved in the call… “Hey, I’m going on the 2nd most dangerous hike in Washington where a mistake could prove fatal…. wanna come?”  Whatever his pitch was, he got 3 other teenagers to join him.  Bro. Jarvis was on the hook to guide these boys to Lake Constance and then to the cat ears and back.  And for better or for worse, I’m tagging along for the ride.

Day 1: “Biking” to the Trailhead

The first day involved a 5 mile bike ride up a gradual hill.  For me, it was a bike “walk” where 95% of the time I was walking my bike.  The bike became just another thing I was hauling up the mountain.  Luckily, the slope was not too steep… but it was constant.  There was a point where the road was washed out by the river, and it was a little tricky to get all the kids and the bikes through, but brother Jarvis took a hold of the rope that was installed in the steepest part of the washout and helped pull up everyone’s bike – one by one. 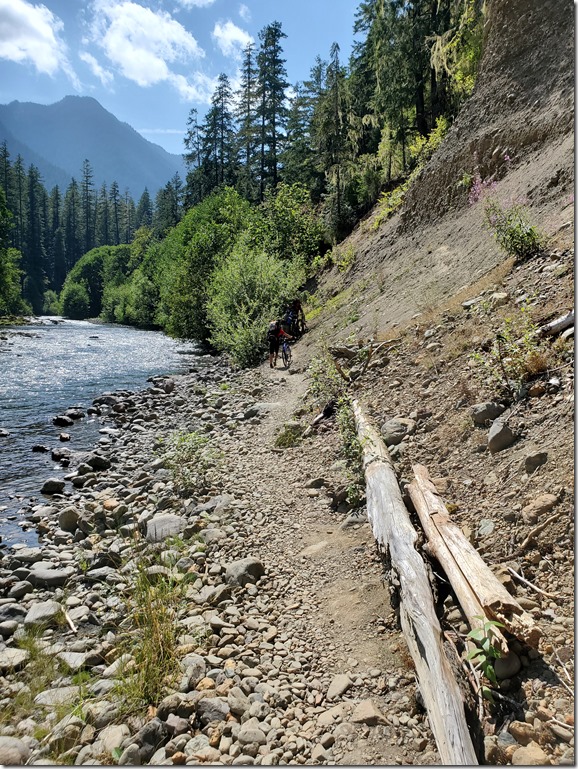 Our first night, we camped at the campsite that was about half a mile from the trailhead to Lake Constance.   We enjoyed a good card game of “Scum”, then hit the sack in preparation for the monster hike.

Day 2:  Hiking up to Lake Constance

The next day, we hid the bikes next to a tree growing on the edge of a precarious cliff.  No one would be dumb enough to try and retrieve our bikes… it’d basically be suicide… (I just hoped that I wasn’t the one who had to eventually retrieve our bikes… )

We, then, started our hike upward.  It’s hard to show in pictures just how steep this hike was.  The stats say that it’s 3300 feet of elevation gain in about 2.2 miles.  I would describe it as a constant 5 hour climb of a ladder made out of tree roots and rocks. 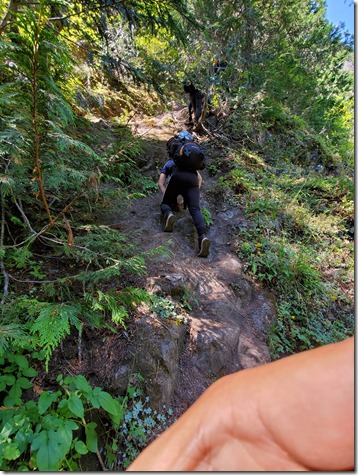 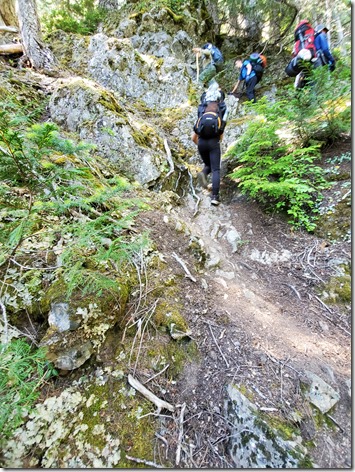 The last picture is of brother Jarvis leading the way (as he did most of the time) through all of the precarious terrain.  It reminded me of how I imagined Gandalf from the Lord of the Rings, swiftly and easily leading his band through the woods.  For a man in his 60s, Bro. Jarvis moved more like a jungle cat than a human – flowing over roots, rocks, and branches like water running uphill.  He has a good repoire with these young men because he knows how to challenge them.

When we reached the Lake, we were rewarded with the splendor of a deep topaz lake that reflected the surrounding hills like a mirror.

That night, we did not play cards, but we sat together on a beach and talked.  We got to know a lot about Bro. Jarvis.  He told us that he has changed much since he was the age of these young men.  He opened up about losing his mother when he was just 11 years old to a drunk driver.  He told us about the difficult relationship he had with his father.  Of some of the trouble he had been in as a youth and some of the consequences.  Of difficult struggles he has had with his children.

The boys had to earn the right to view this gorgeous lake by conquering the treacherous hike that protected it.  Likewise, they also got an opportunity to get a glimpse into a beautiful man’s life and some of the difficult experiences that shaped him.  Bro. Jarvis is not perfect and he readily reminds everyone that he has challenges yet to overcome.  But, I know I would do well, if I could be half the man he was… not only physically – but in his generosity toward others – especially the young men that he mentors.

And as you hear his stories, you can tell that the grit, self-determination, and self-reliance are traits that had wrought over years of challenges and struggles.  Some of those experiences left lasting scars.  Some brought him to his knees and changed him.   But, they were all part of great Gospel plan that tamed a rebellious young man into an earnest disciple of Christ.  Through cycles of struggles and repentance, God refines us with fire.  These are stories that young men need to hear, and these young men earned it by climbing up the 2nd most dangerous trail in Washington State.

Back to the hike… 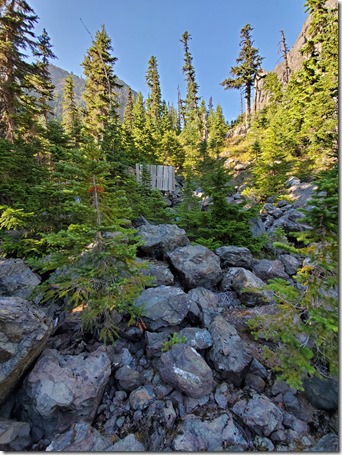 This is the bathroom at Lake Constance.  It has one wall, a toilet seat, and a hole.  It will probably be the most beautiful place that you will ever do your business.  A little warning though:  It has a plastic step that is EXTREMELY slippery – almost like ice.   A fall would land you into a pile of uneven boulders about 2 feet below.  This is one of the two places where I thought I could have hurt myself seriously.

The next morning, we woke up before 6am.  We ate breakfast and packed up all of our gear.  By the time we hid our bags, it was almost 7am as we started our trek.

Here is Brother Jarvis about to lead the crew into the mountain – a place he refers to as the cat ears.   Lake Constance is behind us.  The sun does not come over the mountain for another 3-4 hours.

It’s difficult to describe in words and even in pictures how steep the mountain is.  It’s covered in rocks.  Sometimes big boulders, and other times in gravel pellets.  When we’re hiking through the gravel, it feels like for every two steps forward, you slide back a step.   It felt to me how I imagine Frodo and Sam would feel on the path to Mordor.   Most of the hike was done in silence and concentration.   Now and then, brother Jarvis would provide some vital instruction on how to not kill ourselves. 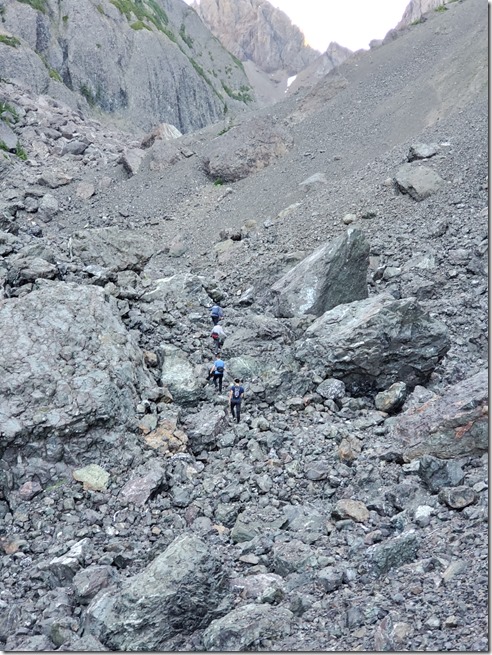 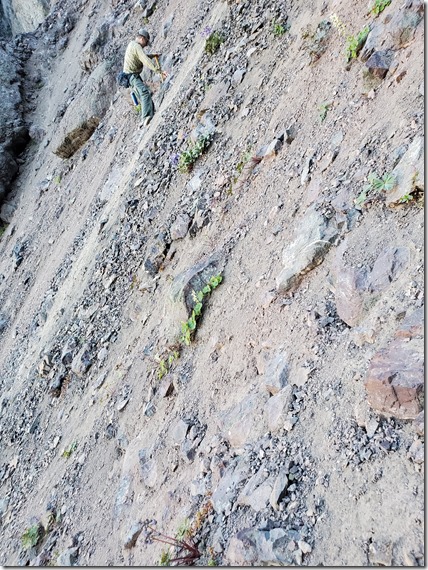 This is probably the best picture I have that truly expresses the steepness of the incline on the way up to the cat ears.  No other picture does it justice.  At pretty much every step, you wonder if you’re going to start a rock avalanche and slide down on your belly getting cut up along the way.

This is the other incident (other than the toilet) that I could have seriously injured myself.  I strayed from the group and followed my “own” path… I suppose it’s a lesson in optimizing for a short-term “easy” path.  What started out as easy turned into a very difficult and treacherous path when I tried to rejoin my group towards the top.

As I got higher and higher, it did become quite frightening when I started thinking about a mis-step that would lead to a very, very long fall downward – sliding and scraping along the razor sharp rocks.  Luckily, the fall never happened.  Caleb told me that he had to take a few pictures without looking for too long because he thought I was going to fall.  I suppose that’s a form of love from a teenage son.  I’ll take it. 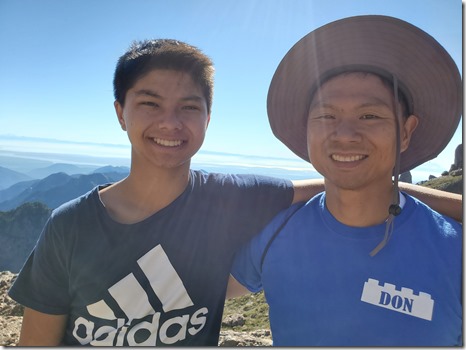 This is what it looks like from the top.  You can see Mt. Rainier on the right.  You can see Hood Canal and the Puget Sound.  You can also see all the way up to Mt. Baker.  The view is spectacular and worthy of the danger and effort it took to get there.

Going down was just as much of an adventure as going up.  In some ways, it was even more difficult.  Glissading is a term usually reserved for sliding down snow or ice.  Brother Jarvis told us that we would be glissading down the rocks.  It wasn’t quite what I thought it was going to be.  First, the rocks are extremely sharp.  If you tried to slide down on your bottom, likely you’d need medical attention pretty quick.  It was more like stepping down stairs that was made out of an avalanche.  Having gloves really helped because it’s easy to lose your balance.  If you put your hand down on the sliding rocks, it could easily be cut up.  Caleb and I shared a pair of gloves and were able to get down with just a few scrapes.

On that last day, we hiked down from the cat ears.  Then, we hiked down from Lake Constance to the trailhead.  By that time, we were all exhausted.  It was unclear in the beginning why we drug our bikes all the way up the 5 mile climb to the trailhead, but when I whizzed down the trail on my bike with my exhausted legs resting on the pedals, I couldn’t wipe the smile off my face.  I guess brother Jarvis knows what he’s talking about.  As we all slumped into the car, I think everyone that participated felt a sense of accomplishment.  There was a glow of a challenge that was overcome.

Some challenges we choose… and some we don’t.  Some are self-inflicted and some are inflicted upon us whether we like it or not.  But, all challenges can strengthen us and increase our capacity and ability.  If nothing else, it gives us experience  In that way, adversity is a blessing given to us.  I don’t ever pray for adversity, but when I am struggling, I remind myself that there is a purpose and I will be more able in the end. Some challenges are overcome by gritting our teeth and powering through.  But, some of the most difficult ones are overcome on our knees – through prayer, through forgiveness, through repentance, by extending mercy and receiving the mercy and charity of others.  The darkest challenges are only overcome by opening our hearts to receive the mercy that God has already given freely to us through Jesus Christ.

God-willing, maybe I can be like old brother Jarvis one day.  But, I know there’s a price to pay for growth.  Growing is uncomfortable.  And sometimes the hike is steep.  Sometimes, it’s a ladder made of roots and rocks as far as the eye can see.   When you get to the other side, or reach the summit of a particular challenge, you are rewarded. Sometimes with a spectacular view of God’s creation.  Sometimes with a spectacular view of God’s plan and love for us.