I was recently at a community meeting with the new Superintendent of Federal Way.  I heard one of the parents say that there was a nuclear reactor in Federal Way next to Decatur High School.  WHAT?!?  She said that there was a man with a fusion reactor in his basement and high school kids come over to do science projects.

After the meeting, I made a beeline for the nuclear lady and asked her for more details.  She gave me the website and I spent the rest of the evening looking into what they were doing as well as researching how fusion reactors work.  That night, I emailed Carl Greninger who runs the program and asked if I could take a tour.  I got a reply the next day inviting us to his next meeting on Friday night at 6:30pm.  Great!  This is exactly the kind of thing I want to be doing on a Friday night!

When Caleb and I got there, it was an unassuming split level house in a very ordinary looking Federal Way neighborhood.  A bunch of teenagers arrived the same time we did and told us just to go in the house.  When we opened the front door, Carl greeted us and escorted us into the garage of his house.

It looked like an ordinary garage.  It had 2 cars in it and some wood working tools.  Carl told Caleb to go stand in front of the drill press and asked him if he could guess where the Reactor was.  Caleb shyly looked around the work bench and behind himself, then shrugged his shoulders.  Carl went over to the bookshelf and moved a few things, then it opened up into a secret lab lined with LED lights.  Caleb’s eyes widened and he whispered to himself, “Cool!”

We walked in, and there in the middle of a small room sat the reactor.  Carl gave us a thorough lecture on radiation safety.  He had all kinds of detectors monitoring radiation.  He gave Caleb and I our own personal Russian radiation detectors that clicked when it detected radiation.  All the regulars wore little radiation badges that show lifetime radiation exposure.    He had some very sensitive equipment that detected background radiation that emitted from the ground and other naturally occurring sources.  He assured us that he and his team take radiation safety very seriously, and ensured us that there is no radiation exposure from the fusion reactor.  (Later when he turned on the reactor, he showed us all the instrumentation to assure us that there was no radiation leakage.)

He then showed us the power supply for the reactor.  It was a transformer that looked like it came right out of a Frankenstein movie.  He told us that the first stage takes up the voltage from 120V to 30,000V.  Then, there was a second stage that kicked it up above 100,000V.  All of this to transform Hydrogen gas into a plasma inside the reactor called a Fusor.  I think he said that the temperature of the plasma was 3million degrees Fahrenheit.  I may have misheard him and it may be 300million degrees.   There was a lot of information coming at us, but the take away was that it’s probably the hottest thing that I’ve ever stood next to (my wife excluded).

In this next video, you see Michaela.  She is a freshman in high school.  I spoke to Michaela afterwards… or more accurately, she came and spoke to me.  She asked me what else I would like to know about the program.  She asked me if I had questions or if I would just like her to show us around.  She was probably one of the most articulate and professional high school students I’ve ever met.  I was later told that she just earned her red badge by recently passing all of the tests that Carl gave her based on the Department of Energy material listed on his website.  To see all of the subject matter, see here.  It is some serious course material.  Here she is operating the fusion reactor for the first time with Carl instructing her:

The first time, the plasma petered out.  Here is the second time, when you’ll see plasma on the screen right above Michaela’s head.  You’ll also hear the radiation detector clicking in the background as fusion is happening in the reactor.  (The detector is instrumented inside the nearly 1 ton lead/cadmium shielding.)

After spinning down the reactor, Carl lifted up the shielding using what appeared to be a hydraulic lift.  Michaela explained to Caleb how it worked and where the magic was happening.

The fusion reactor was pretty awesome.  But, I came to realize that this really wasn’t about a fusion reactor.  This was about the kids.  These high school students were amazing.  I got to meet many of them as we went into an adjacent room which was a meeting hall with a projector and lectern.  All of the students were dressed in their white lab coats.  They all had on different colored badges which signified that they have passed certain tests.  After some announcements, Carl dismissed the class to start lab. 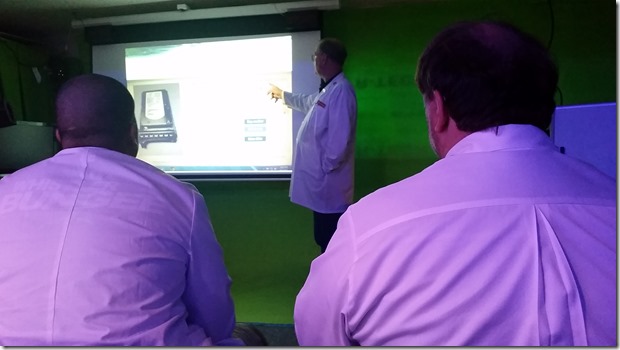 One of the students showed me a contraption that he made on a milling machine.  He was using an aluminum brass coupling to make an actuating shield.  How did he know what materials to use?   How did he know how to use a milling machine? These are things that I learned when I was a junior in college.  He talked about the 6 hours it took to make the component and how he cut himself a few times trying to debur the sharp edges.  This was a component he was creating to conduct some experiments inside the reactor.

Here is a snippet from their website of these student’s accomplishments:

I was told that one of their high school freshman just won an $80k scholarship.  This student has 3 more years until they even attend college!

This experience opened my eyes to what could be done in education.  I asked Carl if there is anything I can do to help?  Where was he going next?   In his pamphlet, he describes what he is doing as a private science club.  It seemed like he wanted people to see that this type of club is a viable model for education.  He asked me to help him spread the word to educators.  He is not necessarily looking to expand his program or change it in any way, but it seems like he wanted others to see and replicate.  I did get the impression that one day he may want corporate sponsorship/partnerships.

I am rarely blown away by what is being done in secondary education.  Carl blew my mind.  He has opened my eyes to what is possible beyond a week-long or month-long science project.

I have enjoyed doing a lot of different STEM type activities with my children, but Carl is doing something at a level that I had not even imagined.  The level of time and financial investment he has put into proving out this model is incredible.  Carl has set a new bar for me for someone that is magnifying his God-given talents, gifts, and resources.   It is making me dare to dream bigger about what kind of projects/programs are possible, and what I might be able to do.

It has further impressed upon me that teaching our kids is our own responsibility.  I have no excuse not to provide my children with the kind of education I want them to have.

Thank you for the tour, Carl!  But, more than that – thank you for the vision and what you’re doing.  It’s been a while since I’ve been truly inspired by someone.  It has caused a lot of discussion in our home about what to do next in science and engineering.

Hopefully, we’ll be regulars on Friday nights when Caleb (and Andrew my younger son) are old enough to join.