On Saturday morning, we did some swimming at the hotel.  It was nice because we had the pool mostly to ourselves.  Andrew rode around on my back as I hopped around the pool.  When I proclaimed that I was a Kangaroo, Caleb asserted that he was a dingo.  So, for about an hour we played Kangaroo and Dingo as Caleb chased me and Andrew around the pool with Andrew screaming, “Get away, Dingo!” into my ear.

We drove back into the city and I dropped off the family at the Cable Cars.  Then, I went to go pick up my sister at the airport.  We met up with my family again in Chinatown, and it was back to dim sum at another restaurant.  Again, pretty good dim sum. 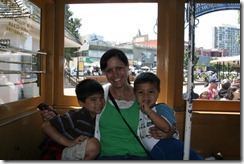 Then, we went to the Walt Disney Museum.  This was probably one of my favorite stops in SF, although I don’t think it’s for everyone.  There’s much to admire about Walt Disney.  I love the standards he held for family entertainment.  He was a visionary that created dazzling and magical worlds.  But, I think the part I loved best was that before he was anything, before he penned Mickey Mouse, he was a failed entrepreneur.  If you would have seen Walt Disney in his mid-twenties, you would have thought him very ordinary.  He had just closed up his cartooning workshop and was heading to California to find a job.   It reinforced to me that you never know what kind of greatness awaits each one of us and when we will truly blossom.  We only have a view of our half-written stories, and seeing Walt Disney’s full life give us hope that perhaps we, too, can contribute something great in the unwritten pages of our book.

After the Disney Museum, we stopped at the Ferry Building.  Unfortunately, it was closing up.  Looked like it would have been fun to browse around a bit, but alas, we were too late.  We didn’t see any restaurants to our liking, so we had headed to an Italian Restaurant – Bertolucci’s – next to our hotel.  Great food.  Affordable.  Plenty of leftovers.  Bread was not burnt.