After church, we went back into the city to wait a long hour in the car so that we could weave down the famous Lombard street.  This famous section is a steep street that winds back and forth between planters.  My understanding is that the purpose of the winding is to slow down the traffic.  Well, it seemed to have worked because it takes about an hour to stand in line and weave down this magical street. 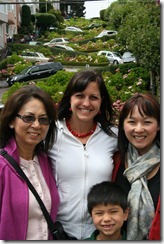 Next, we went to Presidio and Fort Point. 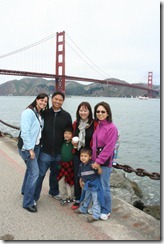 They were giving a demonstration of how to load and fire a cannon.  It seemed like a good skill, so I volunteered to help load the cannon.  There were 4 of us operating the cannon.  1 person to put the shell into the cannon.  1 person to push the shell all the way down the barrel with a giant Q-tip (that was me.) 1 person to hold his thumb over the vent while the shell is being loaded, then puncture a hold in the shell.  1 person to insert the flint and fire the cannon.  They asked for a fifth volunteer.  Someone that was really good at giving commands.   Tenille immediately raised her hand and she was chosen as our captain.  She issued a set of commands, then each of us performed our part in the process.  The Park Ranger told us that it normally took a team about 30 seconds to cycle through the loading and discharge of a cannon.  It took us about 20 seconds.  However, I think I probably would have been much more careful if I was shoving a real cannonball with real gunpowder into the business end of a cannon.  I also probably wouldn’t be too quick in shoving a cannonball in right after one just blew out.  I’m sure many a soldiers that had the Q-tip job went home without hands.  At the end of the demonstration, Tenille and I got Cannoneer certificates.

Sundays on the road are always interesting for our family because a part of observing the Sabbath for us is to not buying anything if possible.  This typically means that we buy our food the day before and we don’t eat at restaurants.  We are often eating preserved food of one type or another, especially when there is no refrigerator.  I probably fared the best because I got to eat the left over Italian from the night before.  Caleb ate some spam and crackers hors d’oeuvres.  Andrew ate a cracker sandwich.  Most people might think a cracker sandwich is two pieces of cracker with a piece of meat in the middle.  Andrew’s cracker sandwich was 2 pieces of bread with a cracker in the middle.  Didn’t look that great, but he ate the whole thing.  I have no idea what Tenille ate.  Probably a string cheese.