Andrew had a hard year this year with wasps and hornets.  He got stung 8 times on our camping trip to Mt. Rainier.  About a month later, we discovered a hornet’s nest at our house.  The kids were given explicit instructions not to play near the Hornet’s nest, but that’s like telling the wind not to blow.  Inevitably, Andrew was a victim of a hornet’s sting.  His leg swelled up big and purple, and we considered taking him to a doctor. 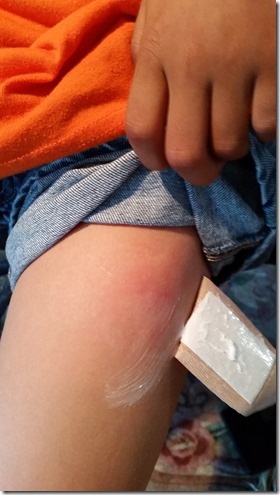 We decided as a family, that it was time to take action.  We put on our engineering hats and devised a plan to take revenge on these hornets!   (from a safe distance.)  We decided to make a robot that could roll up to the Hornet’s nest and deploy a hornet’s nest destroying mechanism – all while capturing the havoc on video.  Caleb and I worked on a Lego Mindstorm robot that we could control remotely using the bluetooth on Tenille’s cell phone .  The robot could hold my cell phone and capture the action on video using skype video.  The plan was to sit in the safety of my Subaru Impreza as we rolled the Hornet’s nest destroying robot up to the nest and watched the destruction over skype.    Knowing how many of our plans actually work out as planned (the probability is pretty near 0%), I had plan B ready in the form of a Hornet Killer spray from Home Depot.

We did a few test runs indoors.  The robot worked perfectly.  Skype video also worked well.  When we took the robot out in the field, there were a few complications.  My phone and the computer were at the outer edge of the wifi range, so Skype video was intermittent.  I had to bring our router out near our front door.  Also, the terrain of our terrace (where the Hornets were located) was not flat Pergo.  It was a pretty severe hill and covered in bark.

We all ran into my Subaru and closed all the doors.  Tenille who had been shaking her head at us, also ran into the car because at the end of the day, who doesn’t want to see a robot destroy a Hornet’s nest?

The angle of the hill made the lego robot off balance.  I wanted to get it as close as possible to the Hornet’s nest, so that it could just roll up to the nest and do it’s business.  As I approached the nest in my camouflage, I noticed the size of the hornets.  They were enormous!  It did make me pause to think if agitating a nest full of hornets while my family was trapped in my Subaru was a wise activity.  The show must go on.  I placed the robot as close as I dared in front of the nest and ran down to the safety of my car.

In mission control, we did a quick check.  Skype video was on.  (CHECK!) We could see the Hornet’s nest through the video.  Robot was responding.  (CHECK!)

Unfortunately, the terrain was too difficult for the robot.  We anticipated that the terrain would be difficult and used a drive that we thought would be most effective – tank treads.  However, the combination of the incline and the bark made the treads slip.  And as the bark slid underneath the treads, the robot started swaying back and forth.

Because the robot has a long moment arm (to hold the camera and nest killer), the swaying was not a trivial problem.  The robot eventually fell over to the side.

I ran back up to the robot and put it back upright.  I tried to put it even closer to the nest.  Those hornets were huge.  I ran back down to the car.

Attempt #2!  The robot got a little closer, but this attempt ended like the first one.  The terrain was just too much for the robot.  And now there was the robot and my phone lying VERY close to the hornet’s nest.  It was time to abort the mission and go to Plan B.  What I did not anticipate was that I would have to go on a rescue mission to get my phone and the robot back.

I ran back up to the terrace and slowly inched toward the nest.  The hornets were going in and out of the nest 2 or 3 at a time.  After some more testing, we decided we had to spray.  The robot was not traversing over the terrain.

We used the robot as an observation station. Then, I dumped an entire can of hornet spray on the nest.  It was somewhat satisfying to see the mass of Hornet’s buzz out of their nest in panic, but not as satisfying as seeing the Hornets’ face through Skype as we destroyed their home with a home-made robot…  Either way, the message was sent.  Don’t sting Andrew anymore.