Andrew has been looking forward to his birthday party for a long time.  After a long struggle between a golf invitational and a Mater (from cars) party, Mater finally won out.  I’m not sure if this is common for parents of children with birthdays in December or January, but we’re paranoid that Andrew’s birthday will get swallowed up in the hectic pace of the Holidays.  To add to the already hectic schedule, our anniversary is also in January.

Perhaps, it is this conscientiousness that drove Tenille to stay up until 3 in the morning finishing a Mater cake and decorating our home.  She says that it was all worth it when Andrew begged to come up stairs with her eyes closed and revealed all the decorations to her in the morning.  He presented it to her as if the Birthday fairy came and transformed the house into a scene from Cars.  “It’s beautiful… “ he sighed.  ‘Totally worth it’ thought the Birthday fairy.

I was in charge of games.  We played Hot Tow-Mater, and had dizzy races. 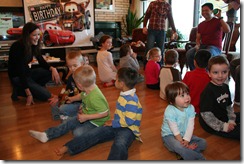 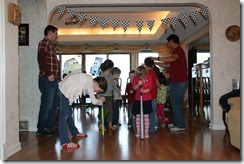 We, also, dusted off the old Pinewood Derby Track (that we got for free a few years ago), and assembled it downstairs.  The previous nights, Andrew, Caleb, and I were pounding together some very basic looking pinewood derby trucks for each family.  In Mater style, we raced the cars backwards down the track.  The winner was the Tomlinsons.  It should be noted that they brought their own car.  We knew we were in trouble when they brought a silver, voluptuous vehicle reminiscent of a Dodge Viper.

An aside: The silver car belonged to Lauren (the wife).  She was quite proud of the fact that her car beat all of the cub scout boys when she was a little girl, but a bit bitter that she could not actually win the derby because she was a girl.  Later, she also challenged Caleb to a game of chess and expressed that she could hold her own in chess.  We determined that one of her primary purposes was to put boys in their place.  If I had a daughter, that’s exactly what I would want from my own daughter.  It’s good for a boy to learn a healthy respect for the capabilities of a woman from a young age. 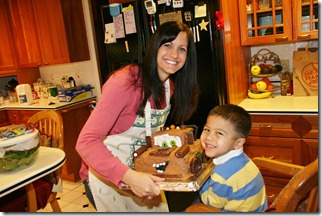 Speaking of capabilities of a woman, Tenille continues to outdo herself on the cake-making.  Every birthday, I warn her that she is on an unsustainable course and at some point will have to revert to the standard sheet cake to reset expectations.  This year, she made a replica of Tow-Mater.  A lot of it was candy… held together by some cake… but magnificent as usual.  Andrew loved it!

What a wonderful boy Andrew is, and how lucky we are as a family to have him.  Happy Birthday, Andrew! 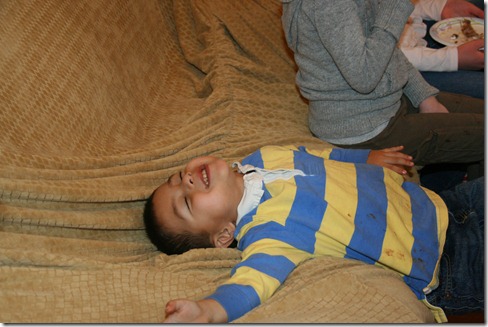