In preparation for Halloween, our family watched the original Star Wars series.  Mostly so that they would know who they are dressing up as.  We tried to watch Star Wars when Caleb was about 5 years old, but the Mos Eisley Cantina scene (where Luke meets Han Solo) gave him a scare, and the Star Wars movies had to be returned to their storage spot until a later date.  This time around, both Caleb and Andrew loved the movies.

It’s interesting to note how you tend to notice dismemberment a lot more as a parent…  Fortunately, light sabers do a pretty good job of cauterizing wounds.

Since then, they’ve been thrilled to find out that there are 3 more star wars movies.  So, we’ve had it on our list for a while to watch the prequel trilogy.  Today was supposed to be the big day.  So, we picked up some burgers and rushed home.  Daddy promised Star Wars tonight!  Hurray!

Sadly, after 15 minutes of searching, I had to call it.   I tried my best bait and switch, and sold them “Goonies” …   It’s just as good!  It’s about kids finding treasure…

Caleb (always the obedient) gladly accepted the substitute.  Andrew, who almost always knows what he wants, kept asking, “Can we watch Star Wars after this?”

Before going to bed, we made plans for a Star Wars prequel party.  I will buy the DVDs, we will invite friends (anyone willing to sit through Jar Jar binks), get dressed in our costumes, and watch episode I.

I wasn’t old enough to watch the original Star Wars in the theaters.  I probably watched the movies for the first time on network TV with my sister.  (Nothing wrong with watching a movie with my sister… but just pointing out that it was low key.)

When Episode I came out, it was  a pretty big deal.  I remember going to the first showing at midnight at the Cinerama in downtown Seattle.  It seemed like more than half of the audience was dressed up in Star Wars gear and costumes.  In the ensuing weeks, all the criticism about episode I started creeping out about how it didn’t live up to the original star wars series and everyone’s annoyance with Jar Jar.  But, I just remember how amped up everyone was on that opening night.  It was the cream of the most hardcore fans stuffed in that theater.  And the theater exploded in cheers as soon as Obi Wan sank his light saber into the solid metal door.  Never seen that technique before!  The biggest cheers were saved for when R2D2 (the first character from the original series) came on screen.  There was just something awesome about being in a room full of people that are CRAZY in love with a movie.  The only other movie where I felt this kind of audience passion was at the Sound of Music Sing-a-long.

When Episode II came out, I was in business school.  Remembering the experience from watching Episode I, I convinced my friends that we needed to dress up.  Becky and Amy Brown just happened to have a bunch of dress up costumes because they were nannies.  Lucky for us, they had quite a few Star Wars costumes…   We had Princess Amidala, Anakin Skywalker, Jar Jar Binks, and C3PO. We were one costume short, so Austin Power also came along for the ride. 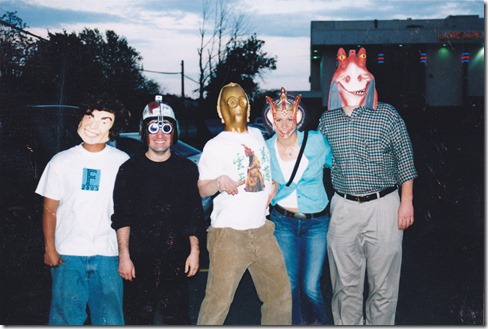 What I didn’t think through is that we were going to a theater in a mall in the suburbs of Boston… And we were not going to the very first showing.  This is a place and time when “normal” people watch the movie.  Not the crazies…. And when we busted through the theater doors, all heads turned… unmasked, normal heads….  attached to uncostumed, normal bodies.  Nobody else was dressed up.  And why would they be?

We tried to stroll down the center aisle nonchalantly.  As nonchalantly as 6 costumed adults could walk down a center aisle of a suburban movie theater.  A murmur crept over the theater and everyone was looking at us.  The awkward stares turned into applause.  We snuck into a free row and hid ourselves among the theater crowd.  Hiding as best as 6 costumed adults could in the middle of a suburban movie theater.

In our home, we’ll soon have our Episode I party.  (Just ordered used DVDs off of Amazon.)  I hope my kids love watching it as much as I did.  However, I know they won’t get that Cinerama experience of sitting in a room full of die-hard fans.

If I’m not dead, I will be at the Cinerama on opening night with my kids.