Skip to content
We went to Jingshan Park by the Forbidden City for our Monday family outing.  It is a beautiful park in the middle of the city.  In the park, there is a hill with steps leading up to a Pavilion that gives a beautiful view of the Forbidden City and surrounding city.  We opted to leave our stroller at the bottom of the hill behind a tree thinking it would be safe.  We summited the hill, took in the great view and made our way down only to find that our stroller had been stolen.  Seriously, who would take a stroller?  We were so bummed!  I went to one gate to ask the attendants while Don stayed at the "crime scene" to ask any passerbyers if they’d seen our stroller.  At the gate no one spoke English, so I did my best to explain with my very limited Chinese and pantomiming skills, but it didn’t really work.  I tried calling our tutor, Bill, and ayi, Luo, to help translate, but no luck.  So, Don and I met back up.  We searched all over, and finally went out another gate.  Don speaks better Chinese than me and has "mad pantomiming skills" (his words), so he was able to convey what had happened to the guy at the gate.  It’s very amusing to watch us, I’m sure.  If you can imagine with me, here’s how the conversation sounded (translated from Chinese)/looked:
Don:  "We have baby car" (Don pretends to push a stroller).  "Baby car…." (pantomime placing stroller on ground).  "We go up" (use fingers to show someone walking up a mountain).  "We look" (charade someone looking with hand on forehead).  "We go down" (use fingers to show someone walking down mountain).  "Gasp"  "No baby car"  (Look of surprise and corresponding action)
The guard mimicked our incredulous looks as if to say, "I can’t believe somebody would do that!"  He explained to a woman entering the park, and she too gave a look of disbelief.  She offered to watch his post while he ran to the ticket booth to call the other gates.  Nobody had turned it in.  We got the number of the park and figured we would have Bill or Luo call the next day.
We solemnly left the park.  I tried to console myself with thoughts that the person who took the stroller probably needs it more than we do.
We caught a taxi, and I showed the driver the map I had printed out for a popular dim sum restaurant (several locations in Beijing), to which the taxi driver said didn’t exist.  He started naming off the locations, and we finally agreed to go to the one by Dietan Park.  (Don and I are really surprised that we’re starting to understand some of what the taxi drivers say to us.)  We had been to the restaurant before during the New Year’s Festival, but this time it was much less crowded.  The food was great!  We walked through a Hutong (old Chinese alleyway) and over to Beihai Park.  We were solicited by several pedicab drivers who wanted us to take a pedicab tour.  "Regular price 180/person.  I give you 180 for whole family."  Don wanted to walk around.  I kind of wanted to take the tour to rest my feet.  But, we continued on.  As we walked away from the driver, he yelled, "Okay, 100 for whole family."  Well, now we know how far down we can bargain when we have visitors come.  Beihai Park was beautiful!  I have to say, the parks in Beijing are SO nice!  You have to pay a little (like a $1) to get into most of them, but I have no problem paying.
After the park, we caught another taxi only to have yet another taxi driver conversation.  This time the taxi driver was saying that he couldn’t take us directly to Wangfujing street because of the one-way streets and busy traffic.  So, we agreed he would drop us on the other side of Chang An Avenue.  Caleb fell asleep, and this is when we felt the affects of not having our stroller.  Don had to carry Caleb through the huge underpass and then to the far end of the mall to the Sichuan Restaurant he wanted to eat at.  I had Andrew in the Ergo.  We were seated in a room where the table is at ground level and the entire room is padded, even the walls and ceiling.  We crashed on the seats, and Don ordered an array of Sichuan dishes.  I’m not a fan of spicy food (which I now know how to say in Chinese), so I’ve been hesitant to try Sichuan food.  But, Don assured me it would be bu la de (not spicy).   Surprisingly, the food was pretty good, and we were both stuffed!  For the first time since moving to China, we took home doggy bags.  Usually we just leave the food cause it’s so cheap, but this place was a bit pricey.  We took a taxi home without any problems, and we were glad to be home after another adventurous day in Beijing.
The next day, I explained what had happened to Luo.  She laughed at me when I told her that we hoped somebody would turn it in.  (I thought back to when I lost my camera at a park in Bellevue when Caleb was a baby, and somebody had turned it in.  I imagine when you live in such a poor country, the rule is more likely "finder’s keepers".  We had Bill call the park, but no luck.  So, now I’m on the hunt for a new stroller in China.  Hopefully I’ll be able to find a stroller that’s not too expensive and lasts for the next 3 months.

The local culture in the parks is fun to watch.  There were people dancing around with these huge ribbons while a woman sang into a microphone.  Later on in the park, we found like 50 people line dancing.  We were amazed at how many dances they knew! 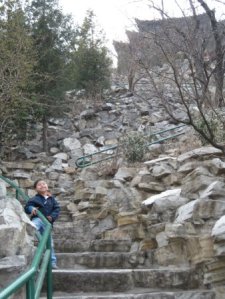 Hiking up the stairs to the pavilion.  You can see why we didn’t want to lug the stroller up with us. 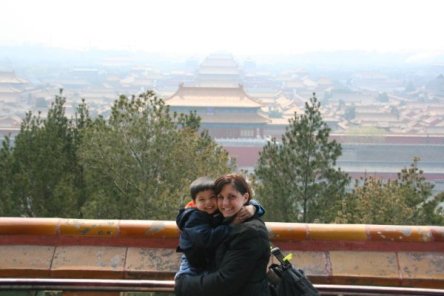 view of Forbidden City from Pavilion 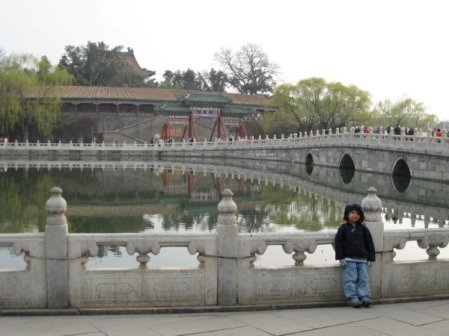 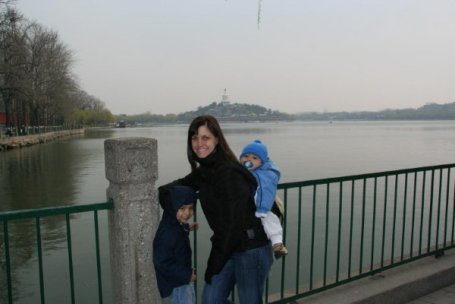