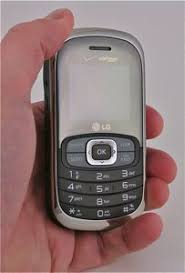 This was my phone – the LG Octane.  Notice that it has buttons – not virtual icons representing buttons.  It was designed for making phone calls.  I loved my phone.   Mostly because I don’t have to put in my password, swipe this and way and that, find the phone feature, then start tapping at a glass screen to punch in a phone number, then hold up what feels like a breadbox up to my ear… On my LG Octane, I just push the number buttons.  It responds with satisfying telephone number tones, then I push send, and I’m talking on a telephone.  Best of all, it was cheap.  At a time when friends were plunking down $300 for an iPhone, I got my flip phone for nearly nothing.

But, sometime in the last few months, it stopped retrieving my email.  I also love email.  Well, I don’t really love email, but sometimes being away from email makes me a little nervous, especially because we are a frequently vacationing family and there’s a lot of stuff at work that ALWAYS needs to be working.

So, a few weeks ago, I went into the Verizon store and asked if they had a phone with buttons that can also reliably retrieve email.  They had a button phone, but they didn’t know about the email.  It was in the back.  It was locked with a password.  The Verizon employee did not know the password.  He told me I could look at it, but since he didn’t know the password I couldn’t really try it out.  Then, he told me that I could probably get it cheaper at Best Buy.  It didn’t take long for it to dawn on me, that this guy doesn’t really want to sell me a flip phone with buttons.  Fine… so I took my business elsewhere.  I looked on Amazon.  I looked at Best Buy… At the end of the day, getting a flip phone that may or may not have email would cost me between $50-$150 with a 2 year contract.  The new Samsung Galaxy S5 would cost me $100.  As practical as a flip phone is, if given the choice between a flip phone and a powerful pocket computer that the modern smart phones are, who would pay the same amount and choose a flip phone?

So, as of today, I’ve caught up with the rest of the world and have become a smartphone toter.  But, with that said, I should probably ease into this brave new world of touchscreen future phones.

Luckily, I’ve been working on a side project that I also managed to finish up this evening.  It’s my own DIY Bluetooth “earpiece”.   Something to help me ease the transition into the modern world.

I had an old Motorola T505 Car Speakerphone from when I drove a car that didn’t have Bluetooth.

I also have an old, beige rotary dial telephone circa 1970 that I snatched off of ebay.  It’s been sitting on my shelf for almost a year – just waiting for that perfect project.  When I first got it, it was interesting trying to explain how it works to the kids.  The rotary dial is not all that intuitive.    When aliens are sifting through our archaeological remains, I am very skeptical they’ll figure out how we used the rotary dial.

Using this relic from the past, I took apart the T505 and hooked up the microphone and speakers to the phone wires.  As sophisticated as today’s electronics are, when it comes down to it, at some point the signal turns into analog as it is hooked up to the speaker and microphone.    I did a little bit of surgery and replumbing, and now I have a rotary phone that I can use to take phone calls.

Now the big question is should I use my Bluetooth “earpiece” in my car?  Or at work?  I can also carry it around because the T505 has a pretty long battery life, but the phone itself is a little bit heavy.  I took out the bells which shaved off some weight, but there’s still a big heavy metal cube in there (which I have no idea what it’s for… maybe a transformer?)

It would be neat if I could actually dial out from the phone using the rotary dial mechanism.  I’ve seen some DIY projects that use the rotary dial as an input device, but it looks a lot more involved than a little bit of wire snipping and soldering…   A project for another day…