On Saturday, I participated in the Federal Escape Triathlon in Federal Way, and was hoping that it would be my best time ever.  Alas, it was not to be.  Don’t get me wrong, I’m not a serious triathlete (or athlete for that matter), but enjoy getting in better and better shape.  I found the secret to being in the best shape ever is to be in horribly bad shape when you’re young.  (Set the bar low).  Then, throughout your 30’s and 40’s, there’s always hope that you can be in the best shape of your life.  I feel sorry for those elite high school and college athletes who now have to admit that they have peaked and are on the downward side of their physical condition.  You should have been watching Silver Spoons re-runs with me during high school.

This is my third time doing the sprint triathlon in Federal Way.    It is a 440 yard swim (1/4 mile), 11.88 mile bike ride, and a 2.93 mile run.  A very accessible event.  The first time I did this, I nearly drowned.  The second time, I took it a bit more seriously.  It’s where I got my best time (including the transitions) which was one hour and 38 minutes.  This time, I felt like I was ready to do even better.

My training swims were up to a mile.   Since my last triathlon I had been riding by bike more.   And I’ve been regularly running about 6 miles under a 10 minute pace which is pretty fast for me.

The triathlon is great, because they write your age on your calves for everyone to see. The oldest gentleman there was 71 years old.  Not only did he do the Olympic length (which is 4x the swim, 2x the bike, and 2x the run), but he did them all at a faster pace than me.  Wow.

There were 3 other gentlemen in the Sprint length that were in their 60s.  3 ladies in their 60s.  (All of whom beat me, except for one of the ladies.)

And you also had the group of guys in their 20s who hadn’t done any training and likely made a bad bet in a bar.  You could see them before the event posing together in muscle-man poses and toting their 30 lb mountain bikes.

The triathlon brings out all-types, and again the Sprint is such a distance that really anyone can participate and have a good time.  If you can backstroke it back to shore on the swim, you’re all set.

For me, the trouble began when I accidentally lined up with the “fast” swimmers.  I usually like to go in the super slow group just because I don’t like to swim among people stroking and kicking furiously.  I’d rather glide along side a bunch of people who are afraid of drowning and taking it easy on the swim.  I saw a bunch of people checking in through the starting gate, but failed to hear that this was the wave of “fast” swimmers.  Just as I was lining up in the water, the announcer announced (as if for my benefit), that this was the heat for “fast swimmers”.  I thought that this wouldn’t be too big of a deal.  I can just stay back, and all the fast swimmers will be long gone, and I’ll just take it at my pace.

However, after the race started, it turned into mad rush.  And there’s an odd psychological affect that happens when you’re exercising with other people.  When you’re running, you naturally start synchronizing your pace with the other people you’re running with.  It so happens, that this is also true with swimming.  In my brain, I kept telling myself to “keep it slow.  Keep it slow.”  But, after about 50 meters, I noticed that my pace was matching those around me, and I was WAY out of breath.  Then it dawned on me that I was now out in the middle of a lake.  The deep, dark, scary lake.  I couldn’t breathe! OH NO!  It was happening again!  I stopped swimming.  I knew my pace was too fast, and now I was starting to panic.  I rolled on my back and took a few deep breaths.  Then a wave rolled over me and water rushed up my nose.  I tried to start swimming again, but I started coughing and choking.  By this time, a life guard in a kayak noticed me and started rowing over.  I rolled on my back and tried to regain my composure.  After about 15 seconds, I started back on the front stroke, but this time I made sure my pace was excruciatingly slow.  I felt the kayak hit me a few times on my feet.  The lifeguard was practically right on top of me.  In some ways, I was grateful.  After about another 30 seconds of slow pace, I regained my confidence and picked up the pace again.  I probably lost about a minute or two, but was able to finish up strong in 11:11. It’s amazing how much of this is all psychological.

I ran out to the transition station, and this was when I hit my biggest setback.  My front tire was flat.  I had a CO2 cartridge and had brought along several tubes.  I quickly replaced the tube, and discharged the CO2 cartridge.  The pump was unfortunately, not seated correctly, and the air didn’t all make it in to the tube.  Now I had a half inflated tire tube, and no more CO2.  I searched around to see if there was a pump I could borrow.  A lady that just finished the swim, but was part of a relay team helped me and found a pump.  As I was pumping up the tire, it pops.  UGH!  I ran back to my station and replaced my tube again.  I noticed my hands were shaking a bit which made it difficult to get the tube in just right.  I ran back to the relay lady who took some time to inspect my tube replacement job, then helped me pump up my tire again.  Whew!  Success!  I ran out of the transition section and started my ride.  Apparently, it took me 17:22 to get out of transition.  Normally, this should take about 2 minutes or less.  But, as I was riding out of the park, I saw Caleb waving me down and cheering me on.  From that point on, the event went about as good as it could.  Finished the bike in 42:55 which comes out to be a little over 16 mph.  I’m not a strong rider, so that’s pretty good for me.  Transitioned to the run in 1:30, then ran the last 2.93 miles in 27:32 which is about 6.4 mph (or 9.4 min miles).  My final time 1:40:29.  Bitter and sweet.  2 minutes worse than my best time, but in my heart of hearts, I know I did better if it wasn’t for those blown tubes.  In the final standings, I was 2nd to last place in my division.  The guy who got “last” did not finish the run for some reason.

There were two silver linings from the delay in the swim-to-bike transition.

1.  I got to do a lot of passing.  It’s always a good morale booster when you can catch up to people and pass them.  Much more so than if other people are constantly passing you.

2.  Next year, it’ll be that much easier to get the best time ever. 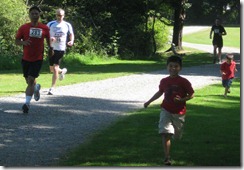