Last week, our family returned from a week long Cruise.  We went along the Western Coast of Mexico with Tenille’s side of the family.  Needless to say, a lot of fun and a lot of eating.  As usual the adults were outnumbered by the kids (even if we count Tenille’s youngest Sister, Rochelle, as an adult.)  It was a bit tough to find seating for 20 people for dining, but Mark (Tenille’s oldest brother) took charge and was able to find formal dining reservations every night with three tables right next to each other.

The most interesting thing that happened was that we almost lost Mark’s family to the Pacific Ocean.   In Cabo San Lucas, there is a natural stone arch where the Pacific Ocean meets the Sea of Cortez.  We were at a narrow strip of beach (called Lover’s Beach), where on one side was the calm Sea of Cortez, and the other side was the very violent Pacific Ocean.  When we walked over to the Pacific side, I distinctly remember telling Caleb that if he got too close to the waves and got sucked in, I probably would not be able to rescue him because the waves looked too strong.  They were huge and made an intimidating noise when they crashed along the shore.

There was a feature along the Pacific side of the beach when the waves receded where you could run around several sets of enormous rocks to get to El Arco.  But, you had to time it just right.  Right after the wave came crashing in and it started to recede, you could sprint for it and make it to the other side of the rock.  If you timed it wrong, you would get slammed by the waves.  And if you were unlucky enough to be at the wrong place, the wave would crash in over your head.   When we got to the Pacific side, we saw a bunch of young men making a run for it and saw them disappear behind the rock.

Tenille’s dad and Jeremy (Tenille’s 2nd oldest brother) were the first to make a run for it.  When Jeremy got back, he got in trouble from his wife.  They offered to watch our kids, while Tenille and I tried to make a run for it.  In my mind, I was thinking – by “watching our kids”, do they mean that they’ll take custody of them if we get sucked in by the waves and die?”  I’m usually the most faint-hearted in our group, and usually volunteer to watch the kids while the adults go and do dangerous things…  Needless to say, I did not make a dash to El Arco.  Surprisingly, the waves proved a bit too scary for Tenille as well.  She’s usually the risk-taker, but perhaps my good sense and cowardice are rubbing off on her.

Later, we were safely playing on the Sea of Cortez (calm side) of the beach, when we saw Mark’s family limping back from the Pacific side.  Mark’s leg was covered in blood.  I interviewed various members of the family and the following is my interpretation of what happened:

Mark and his whole family decided to make a dash to El Arco.  Apparently, they made it there fine, but on the way back, they mistimed a wave and were almost swept away to sea.  Mark was holding on to their youngest and the wave knocked him off his feet.  He held on with all his might and they both went under the wave.  The receding wave was taking his third child, Dawson, and he ran over to grab him (while still holding fast to his youngest).  Just as he grabbed him, a second wave came and pummeled them.  He lost his grip on Dawson and held on to his youngest going under again. By this time, Tenille’s dad, and sister, Rochelle, saw what was happening and ran out to sea to help them.  Rochelle saw a hat in the ocean and ended up rescuing the hat.  Tenille’s Dad ended up rescuing Dawson.  They eventually all made it to safety.  However, when the waves crashed into them, it slammed them against the rock and several of them were cut up and bruised – Mark taking the worst of it.

In retrospect, I’m sure they probably wouldn’t do it again, but it’s hard to make calls like that after the fact.  Mark is a lot like his father in that he is always looking out for everyone and making sure they are having a fun time.  On the cruise, he was the one running around making reservations for dining and excursions.  I remember at Disneyland, he was the one with the master plan and disappeared as soon as we got into the gate.  He appeared with Fast Passes for everyone after running around the entire park.  He was the one making sure everyone was happy and having a good time.  On the cruise, it was like having our own cruise director.  If there’s ever a person that was service-minded, it’s Mark.  And I’m sure that he had a desire to show his family and children this fun landmark which they probably may not get a chance to see again.

This picture probably may elicit mixed feelings from various members of their family.  Respect for the ocean.  A bit of a judgment lapse.  But hopefully, it will also be a reminder of their dad who wants to give them everything. 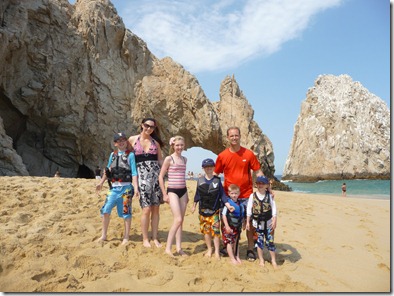 As for me, I played with the kids.  I watched the kids while Tenille went Snorkeling… (again a bit risky with the number of boats zooming around). 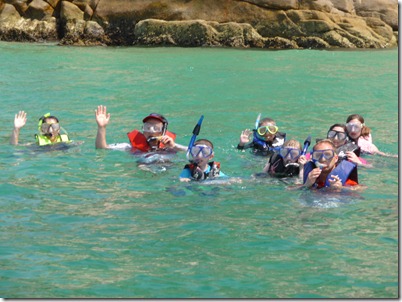 I played with the kids while Tenille went ziplining… 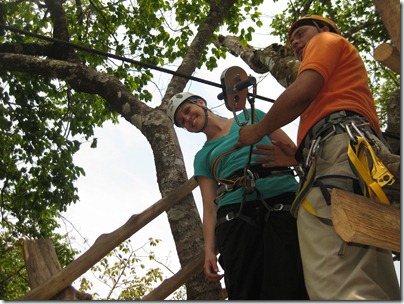 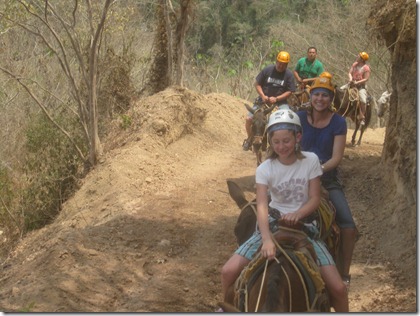 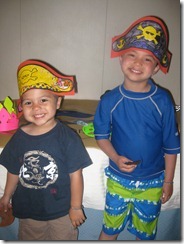 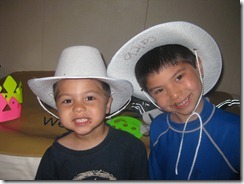 I colored pirate hats, made leis, and painted cowboy hats.  I also did a lot of origami .  Well.. I usually made a boat, but I made a lot of them for a lot of kids.  I also lost my sandal. 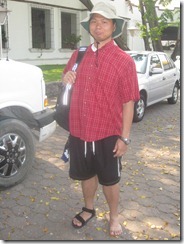 When we were in Puerto Vallarta, I was watching the kids.  We were out on the beach playing.  Andrew told me that he had to use the bathroom, but did not show any urgency.  I should have used a little more judgment as the bathrooms were pretty far away.  You had to walk across about a 100 meters of beach, a maze of pools, then walk through an open air restaurant to get to the bathroom.  After a few more minutes of building sand castles, Andrew squeaked at me in a much more urgent voice holding himself, “I have to go to the bathroom!”  We, then, started the long journey to the bathroom – across the beach, then through the maze of pools.  All this time, his voice seemed to get higher and higher as he was informing me of his urgency.  When we got to the restaurant, his eyes were wide, his breadth was shallow, and his voice was so high, it seemed that dogs would run away.  As we were walking across the marble floor of the restaurant, little Andrew just couldn’t hold it any more. He started leaving a trail of pee.  I quickly picked him up and ran to the bathroom.  When we got to the bathroom, he was all done, and the remainder was on my shirt.  He felt bad.  I felt very bad.  We started the long walk of shame back to the beach.  As we were walking back through the restaurant, I heard an old man ask his wife in a rather loud voice, “Is that the boy?”  He should have been asking, “Is that the bad dad?”

When we got back to the beach, we got in the surf, so that the ocean water could wash away the signs of our shame on Andrew’s swim shorts and my shirt.  I walked deeper and deeper until the water came up to my stomach.   A pretty big wave came and knocked me forward.  I stumbled, and when I picked up my foot, it came up without my sandal.  I was hoping that it would be buoyant and float up to the surface, but apparently it was not.  I dug around with my foot and watched for a few minutes, but it was gone.  My sandal was lost to the Pacific.   All this while, I was holding Andrew and asking him to look for my sandal.  When we got out, he was excitedly announcing to everyone that I lost my sandal in the ocean inviting questions as to what I was doing.  Serves me right… just shows you can’t hide from your transgressions…

Despite the lost sandal and a few cuts and bruises, fun was had by all.   Caleb and Andrew’s favorite part as usual – playing with their cousins…. 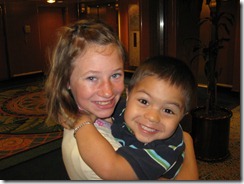 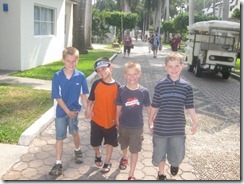 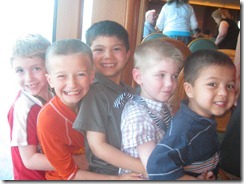 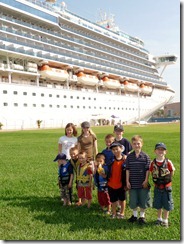 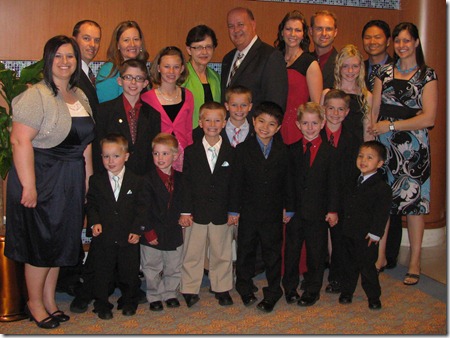 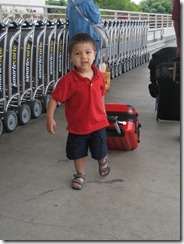 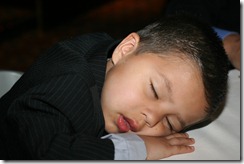 On this trip, Andrew played hard and worked hard and napped hard… Before we knew it, the trip was over as fast as it had begun.