We just returned from our annual Lake Powell trip with the Roberts family (Tenille’s side).

A week before the trip, Tenille’s sister-in-law, Jen, went to the emergency room and they had to remove her gall bladder.  She is recovering well, but unfortunately, their family could not make the trip.

On the way to Lake Powell, when we stopped to pick up one of the ski boats, the trailer hitch was missing.  We had to purchase a trailer hitch at “premium” prices at a local shop.

When we got to the boat launch, we found that the battery was dead in one of the ski boats.  We were planning on jumping it with the other ski boat, however, the boat launch was extremely busy during the end of labor day weekend, and the ranger told us that we couldn’t take time on the boat launch to do that.  It was unclear if we were going to be able to launch our boats.  A few minutes later, he told us to drag it to a pier and get it figured out.  We were eventually able to get it jumped, but it took a few days to work out all the kinks in that boat.

On the second day, we went for a hike to a sandy hill.  The path was quite muddy and slippery.  Tenille’s sister-in-law, Jeni, tried to jump over a puddle and landed wrong.  She thought that she had broken her leg.  We carried her back to the boat, and she left that night to get medical attention.

On the way back from Lake Powell, one of the vehicles ran out of gas.  Ends up that it didn’t have a low fuel light.  Tenille’s dad ran up to the next town and got some gas for us.

However, if Caleb (or any of the kids) were asked to describe the trip, they would probably not note any of the above.  They might, however, highlight the following:

1. We caught frogs, toads, and tadpoles.  There were rumors about which frogs belonged to whom, and who squished which frog, but at the end of the day, they were all released back into the wild.

2. We caught sunfish, catfish, and large-mouth bass – the latter two which we filleted and ate.  There was an overwhelming enthusiasm for fishing which probably needs to be contained and managed for the next trip.

3. We caught a cricket.  (Same place where Aunt Jen broke her leg).

4. Caleb tried knee boarding again (although not as successfully as last year).  Some of the older kids started wakeboarding.  Everyone went tubing. 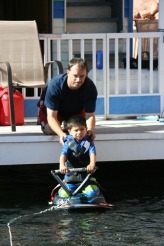 5. We paddled an inner tube out to lizard island and saw lizards.

6. We heard and saw obnoxiously loud insects which I found out are called Cicadas (by googling “loud clicking insect”).

7.  We climbed to the top of an enormous sand hill.

8.  We saw a tree snake on the way to some Anasazi cliff dwellings. 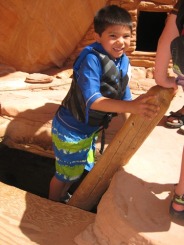 9.  The kids built a cup pyramid that was 9 cups high.  There was some controversy about non-contributors sneaking into the picture. 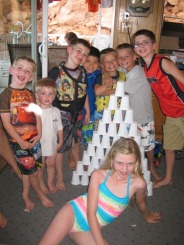 Also, Tenille went skiing and wakeboarding as usual.  Every year, she claims that she’s getting too old and that this may be her last time getting up on slalom.  (I doubt it.)  But, she pulled up out of the water the first time as seen by her cheer below. 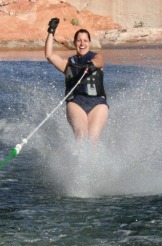 Despite the adversity, a fun time was had by all that could attend (although, the fun may have stopped for aunt Jeni when she was hauled off to the hospital).  To the kids, the trip is like Disneyland.  It happens every year magically – there is no effort involved.  They just need to show up.  Likewise, our family, (not living in Utah), just basically shows up and enjoys the magic of the trip.    But, because of the adversity this year, it was difficult not to note the level of stress it takes to pull off the logistics of a trip like this with so many families along with their children.  Behind the curtain, there are a group of adults led by Tenille’s dad paddling madly to make sure the food is adequate, the boats are running, the houseboat is fit, the people are safe, etc, etc.  It did occur to me that as we get older, it becomes our turn to put in the effort and take on the mantle of creating these memorable trips for the kids.  And no one has been a better example of running around like crazy to make a family vacation successful and special as Tenille’s dad (who I also call Dad.)  I am almost certain that it isn’t always fun, and I can sometimes see the stress on his face as he is fiddling with the boats, the generators, the food, and whatever else is next on the agenda.  But, I can sense and see the joy and satisfaction when his kids and grandkids are excitedly squealing about some new, fun experience they just had.  I know this mission is passing along to his sons as I see the effort they put into their own family vacation plans to create meaningful memories for their children.  Hopefully, it is a tradition and sense of responsibility that passes through our own family.

On the Sunday before we took off to Lake Powell, we went to church at Tenille’s parent’s ward (local congregation).  During the Priesthood meeting (men’s meeting), I was asked to introduce myself.  I introduced myself, and added that I was Jeff Robert’s son-in-law, just visiting for the week.  The moderator joked, “I’m sorry to hear that” which solicited some smiles and laughter from the quorum, including from my father-in-law that was sitting up front among the leadership.  I regret that I didn’t retort, “Actually, it’s a privilege.”