We woke up at 5am, packed our zombie kids in the van hoping they don’t wake up, and started our 12+ hour journey to Yellowstone.  The idea was that they would sleep through half of the trip.  The plan half way worked.  It worked on the Andrew half, but Caleb was excited and it was hard for him to fall back asleep.  This was the start of about 40 hours of driving over 5 days.  During the drive, we probably watched “Cars” about 4 times in its entirety.  We listened to a radio dramatization of the Magician’s Nephew by C.S. Lewis (which was fantastic).  We started listening to the Adventures of Huckleberry Finn until Tenille deemed that it was of no redeeming value. (Sorry Mr. Clemens.)  I finished my book on tape, “Into the Wild” by John Krakauer.  We live in comfortable times, where keeping ourselves entertained over such a long trip is not too difficult.   It’s hard to imagine what my sister and I did for this long ride 27 years ago, when we were on this same stretch of road to Yellowstone.  Back then, entertainment was pretty much limited to harassing each other (by which I mean me harassing her).

Once we made it over the pass, we made a quick stop at the Horse Statues right after we crossed the Columbia River.

Our next stop was in Spokane where we stopped at a Boy Scout store.  A few months ago, we inherited a Pine Wood Derby Track.  Last month, I made a car with Caleb, but soon found that it wasn’t a lot of fun to race one car by yourself.  So, we are now enlisting other father/son (or daughter) teams to make Pine Wood Derby cars and race with us on our track.  I bought a bunch of car kits, so if you’re interested, give me a ping.

While at the Scout store, I asked the guy there if there was a place I could buy some fishing tackle.  I had bought a “Ready to Fish” fishing pole for Caleb the night before.  Apparently, “Ready to Fish” does not include hooks or weights.  The Scout guy told me that I should visit the White Elephant.  “Is it a Sporting Goods store?” I asked.

“No, they have everything.”

More stuff than Walmart?!?  I was intrigued, and coaxed my wife to make the stop at this magical White Elephant store.

When we got there, it wasn’t that they had “more” stuff than Walmart.  But, they did have more of the interesting stuff than walmart.  It’s a store dedicated to fishing, hunting, camping, and toys.  My mom got in a generous mood (which she often does at Toy stores), and asked the kids to pick out something.  Caleb wanted a humongous Lego set (which I don’t think was what my mom had in mind.)  After a little more looking around, I was able to talk him down to a solar cell science kit which ended up being much more practical in the van (not to mention my mom’s wallet).  Andrew got a Lightning McQueen car.  (a movie that we probably watched 4 times in its entirety during our drive.)  The clerk at the White Elephant was very nice and gave us a few dimes to let the kids ride the White Elephant ride that sat outside their front door.  Andrew, who is usually the daredevil of the family, got scared and didn’t want much to do with it after a few seconds.

Next, we stopped in Couer D’alene for lunch.  This is the kind of city I wish I could live in, if there was an industry there that I qualified for.  We grabbed some burgers at Zip’s and headed for the waterfront park in downtown.  Lunch was supplemented by some Korean traditional picnic food that mom had prepared.  She made Gim-Bap which is a Korean Sushi Roll with rice, beef, egg, spinach, carrot, and pickled radish wrapped in seaweed.  She also made Jang-Joh-Lim, which is Beef Shank stewed in soy sauce.  The saltiness of the soy sauce works as a preservative for the beef.  The Gim-Bap had no such preservative attributes, and it was pretty much gone by the end of day 1.  The Jang-Joh-Lim lasted the entire trip, and we had some for lunch almost every day of the trip.

After lunch, Caleb and I practiced casting his new fishing rod at the edge of the park.  He was pretty good.  He got the line stuck in a tree a few times, but we were able to tease it back out without too much trouble.

One of the main reasons that we left so early in the morning, was so that we could stop at Splash Montana in Missoula, Montana.  Best $20 I spent on my drive to Yellowstone.   Splash Montana is a small water park with a couple pool, lazy river, water slides, etc.  After a long drive, spending a few hours in a water park was welcome relief.  As we were showering to leave, an attendant came in the bathroom and told us all to get out of the shower and out of the park because there was a lightning storm approaching.  Not something we experience much in the Seattle area.  Apparently, the dry weather is great conditions for lightning.

Finally, we grabbed some dinner at a Mongolian Grill in Missoula, then headed for Butte to bed down for the evening.  A travel tip for fellow road-trippers: We picked up a travel coupon magazine at a rest stop which ended up saving us about $50.  We wanted to stay at the Best Western that offered a 40-item breakfast buffet, but apparently so did every other traveler going through Butte.  They were booked.  We settled for the Comfort Inn.   Unfortunately, the coupons did not work on the way back as we unluckily hit Butte on Evil Knievel Fest Weekend.  We saw the highlight on our free newspaper the next morning where a man jumped a car into a set of 5 cars standing on end like dominoes.  Apparently Evil Knievel fest is a big enough deal in Montana (even though it was being held hours away), that it qualifies as a special event exemption of the coupon.  Tenille was able to still talk down the Motelier 15% and we got a free car wash coupon out of it.  Unfortunately, the car wash coupon was only valid in Montana.

In the morning, we found that the Comfort Inn dining area had a waffle maker which was fun.  We hurriedly ate our breakfast and got back on the road.  Tenille remembered going to the Lewis and Clark caves when she visited Yellowstone as a young girl.  She said that it was one of the only things she remembers and really wanted to go again.  You hike about half a mile from the visitor center to the top of the cave mouth.  The actual cave is a hole in the side of a hill that drops straight down for hundreds of feet.  You end up walking down about 600+ steps from one cavern to another to emerge out of a man made tunnel that connects to the bottom of the cave.  Before you enter the cave, you are asked not to take flash photography and not to talk in the first couple caverns.  The tourists didn’t seem to take the ranger seriously until she mentioned that it’s so we don’t disturb the bats.  The first 10 minutes of the tour was silent.  It was almost as if we were in a holy place.  The next few hours we were crawling, sliding, squatting awkwardly through hundreds of feet of cave.  It was pretty amazing.  I highly recommend seeing it.  However, I don’t recommend going through the tunnel with a toddler in a front pack. 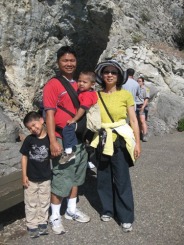 After the caves, we finally met up with Tenille’s extended family and our kids were swallowed up by their cousins.

When I mention that we went to Yellowstone, I’m almost always asked, “Did you see Old Faithful?”  Yes, we did.   I’m sure it’s just a polite question that you just ask without thinking, but who goes to Yellowstone, and doesn’t make it to Old Faithful?  Has anyone really said, “No… we just saw a few stinkpots… hit a ranger station, then decided to drive 14 hours back.”  Geysers are a magnificent sight when they are discharging.  Unfortunately, most geysers are very unpredictable.  A sign next to one geyser said that it goes off every 4 hours to 50 years.  I think the signs should be more straightforward and answer the question that the reader is thinking – “No, you are probably not going to see this geyser go off.”  In contrast, this is what makes Old Faithful so special as it goes off every 45 minutes-1hour, and allows every Yellowstone visitor to see at least one geyser. 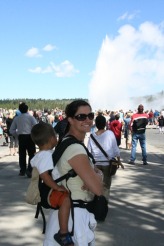 A more interesting question for the recent Yellowstone visitor is “Did you see any wildlife?”  I have been a bit tainted by a trip I took to Alaska a few years back.  I expected that Alaska would be crawling with wildlife, and there’d be a Caribou on every street corner.  It turns out that wildlife doesn’t really like to be seen by people.  On that trip, I saw one moose and came home a bit subdued in my expectations of seeing wildlife meandering within sight of humans.  It was perhaps due to this low expectation, that I was blown away by the amount of wildlife we saw at Yellowstone. 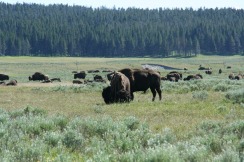 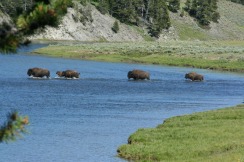 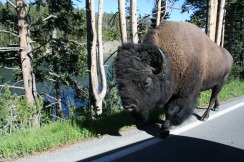 In the Hayden Valley, it was like the set of Dances with Wolves.  We counted about a hundred bison.  They were crossing the road and the river.  We sat in a long line of cars for about an hour, so there was plenty of time to count. 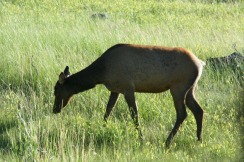 You know we’ve seen a lot of wildlife when the kids continue to play kickball while there’s an elk chewing on a bush across the street.

We also saw a beautiful waterfall spilling into the gorge.

While most of Tenille’s family hiked down a set of stairs next to the waterfall, our family fell behind and snuck in a little fishing at a picnic area.  Grandpa said it best, when he said, “That’s why they call it fishing… not catching… “  We never even felt a nibble…

By the end of the trip, Caleb got his National Park Passport stamped, and got a Junior ranger patch as he was initiated as a Junior Ranger in the Mammoth Springs visitor center.

The drive home seemed much longer than the drive there.  But, Andrew kept us entertained with his thoughts and observations.

When I asked Caleb, what was your favorite part of the trip, he replied, “Playing with my cousins.”  This is why I do not like spending too much money on vacations.  The company you travel with makes the trip, not the destination. 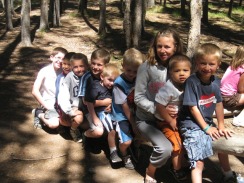 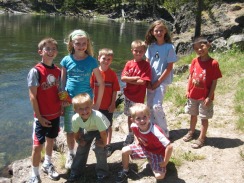