Every Sunday we go to the Beijing branch of the Church of Jesus Christ of Latter Day Saints, commonly called the Mormon Church.  There are 3 different branches that meet in the same building.  Our branch is for foreign passport holders that live within the city limits.  There is another branch that is for foreign passport holders that live outside the city limits, most of them living in a expat community called Shunyi.  Many foreigners with older children tend to live in Shunyi because that is where some of the best international schools are.  There is a third branch made entirely of Chinese nationals.

There are approximately 200 members (including kids) in our congregation.  The other foreigner branch meet before us, and from what I’ve seen their size looks about comparable.  I have never seen a member of the Chinese branch.  I was told that we are not to have contact with them, and we should be out of the building before they begin their services.

My understanding is that the Chinese government has a concern over a non-government leadership structure that is based in another country.  I could understand their concern about people’s loyalties potentially conflicting between their religion and country.

Printed on our program every week are the rules under which we are allowed to congregate in China.  At the start of each meeting, the branch President brings our attention to these rules and reminds us that we must abide by them.  The hope is that the Chinese government will recognize us as an obedient, law-abiding community that will be positive for the Chinese people.  And hopefully this recognition will lead to invitations to participate more fully within the native Chinese community as a religious organization.  I think I can safely say that is the hope of each LDS member in Beijing.  Long time members of our church have expressed that this hope is slowly being realized and policies are slowly opening up.  I took a picture of the rules as hopefully it will at some point be an interesting relic of this transition period. 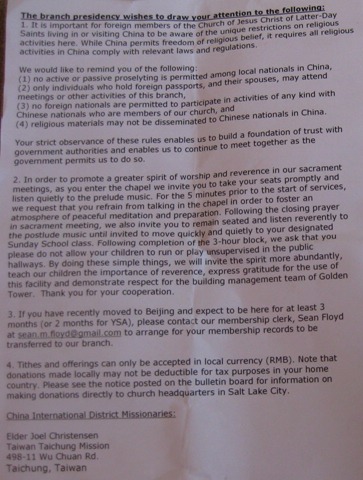