It’s our first Friday night, and we decided to go out on our first family adventure for the sole purpose entertaining ourselves.  We got downstairs to the front desk to call a Taxi.  We found out that it was an extra 3 Yuan (50 cents), for the Taxi to come to our apartment.  It’s probably worth it, but this time, we decided to take a stroll to the street to catch our cab.  The front desk wrote where we wanted to go on a piece of paper for us so we can show the cab driver.  After a few false starts (forgetting kids clothes and going to the bathroom), we were off!

When we got to the big street, we hailed a cab.  I was excited to see if I could tell him where we wanted to go.  I tried my best to say, "We are going to Wangfujing."  He looked at me, then read the card I was holding, then nodded and started driving.  Hmm…. not sure if that worked as I had hoped… But, nonetheless, we’re going to the right place.

We got to WangFuJing street.  It was my job to get some cash from the bank.  We were given conflicting advice about credit cards.  The lady from Sante Fe told us that every place takes credit cards, and we should use it.  Curt told us that credit card security is not very good in China – sometimes all of the numbers are printed on receipts, etc, and there is a lot of CC fraud.  We opted to play it safe and work mainly with cash while we were in China.  It does force us to carry a little more cash than we’re used to, but it’s better than finding out that our credit card is being abused. I went into the bank, and the ATM had an English option (which is good).  I took out the limit – 2500 RMB which is about $350.  I tried to go back out the front door but an attendant started speaking to me in Chinese and led me to the back side of the bank.  I wondered if I had done something wrong.  Maybe I took out too much?  It ended up that there were two other ladies that were being led to the back of the bank, and I started seeing exit signs.  It ended up that we were led to leave the bank through the back door, which led us to a hallway with bathrooms, then exited out into a mall.  I went around, exited the mall, and met back up with my family.  I wasn’t completely sure why I didn’t get to use the front door, but my best guess is that the bank might be concerned about beggars accumulating in front of the bank, especially after customers have taken money out of ATMs.  When I was here in November, we were approached several times by beggars.  On this trip, we didn’t see any.  My understanding is that the social safety net in China is not as robust as the United States and it’s not uncommon to see people (especially women and children) in a sad state.  This is an area that Tenille and I will investigate more.

We finally got out to the WangFuJing Street proper.  It was clearly a tourist street from the many non-Chinese folks that were there, as well as Chinese tourists that were visiting Beijing (which is not as obvious).  The main part of the street is wide and closed of to traffic and is reminiscent of the Promenade in Santa Monica.  Tall retail buildings skirted both sides of the street.  It was cold and we were glad we brought some extra clothes for the kids.  One of the first things we noticed when we started strolling is that everyone was carrying around sticks of strawberries coated in melted sugar.  Tenille quickly found the source in this food alley.  I went in and ordered 2 sticks.  If we’re gonna get sick, might as well get it over with and learn our lesson.  But, the sheer number of people carrying around the strawberry sticks gave us some confidence and comfort.  After a bit of stumbling with numbers, I got my 2 strawberry sticks for 12 RMB ($1.50).  Each stick had about 5 big strawberries and it was coated in a hard tan translucent melted sugar coating.  When we bit in, the sugar coating cracked.  It was delicious.  Caleb later recalled eating these strawberries as the favorite part of his day.  We did find that the sugar coating got caught in our teeth in a bad way.  Perhaps not the best for dental hygiene, but it sure did taste good.

We made our way down the street and visited the Olympics store (expensive Olympics souvenirs), other souvenir shops, and a big toy store.  The toy store was fantastic.   To me, it felt a bit different than a Toys R’ Us, in that the flavor of most of the toys was pure entertainment with no feigned educational or redeeming value.  Admittedly, I think I was a bit more excited to see all the toys than Caleb.

Finally, it was dinner time.  We weren’t too concerned about language here, because there were so many tourists, we figured most restaurants spoke some English, and provided English menus.  We went back to the mall where I took out cash, and wandered up and down the food court.  We finally settled on a Thai restaurant.  Menus had pictures and English on them.  We were also able to easily get a high chair by pointing to Andrew and saying "chair".  We ordered some fried rice, a pork neck meat appetizer, and chicken satay.  It was all pretty good.  An incident that did make Tenille a bit nervous was when a seemingly homeless man (carrying a sleeping bag) kept stopping right outside the window we were sitting next to and was staring at our kids.  He would move on, then he’d be back in 15 minutes and stare again.  He seemed harmless and to me it seemed like he was more admiring them than planning to kidnap them.  Nonetheless, still a bit uneasy when anyone stops and stares at your kids for too long.

We strolled around the food court some more and managed to get ourselves a frozen yogurt with some fresh fruit mixed in.  They prepared the yogurt in a backroom hidden from view and it took a while.  I commented to Tenille that it was probably taking a while to dump all the melamine in.  Regardless, it was delicious.  In general, the fruit in China seems much better than in the states.  Perfectly ripe and sweeter.  We’ve had a great experience with grapes, apples, strawberries, oranges and miniature oranges.  Caleb got a chocolate covered donut on a stick, and Tenille got an ice cream puff.  We promised ourselves, we’re coming back to this place.

Now for the taxi ride home.  If we can get home safely, it would be a perfectly executed evening.  We got back out to the main street and got in a taxi line that had an attendant.  We were ushered into a taxi and I gave him the card of our apartment and said, "SanYuanQiao" which means Third Ring Bridge (which is the area we live in.)  He turned on the light and looked at the card.  Then he squinted.  He opened up my window and asked the attendant to take a look at the card.  The attendant read the card to him.  Then they bantered back and forth a bit more.  I thought, perhaps he can’t read?  I suppose you don’t really need to be able to read to drive.  Then it occurred to me, he can’t see.  The revelation hit me as we started speeding off.  About half way to our home, he made a gesture as if talking into a phone and pointed to my card.  I promptly called my apartment front desk and told them that our taxi driver needs to get directions, and handed the phone over to the taxi driver.   They talked for a minute and he handed the phone back to me.  When we got near our apartment on the main road (Third Ring Road), he and I started exchanging hand signals to direct us back to our apartment.  I felt pretty good about this, as just a few days ago, I couldn’t have even done that.  I paid the blind taxi driver and we arrived home safely.  Hooray!  We did it! 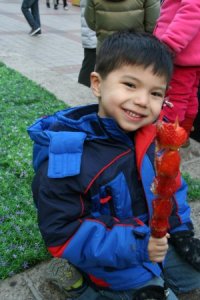 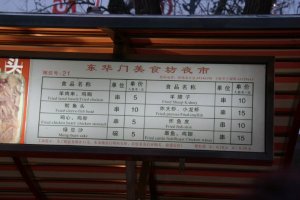